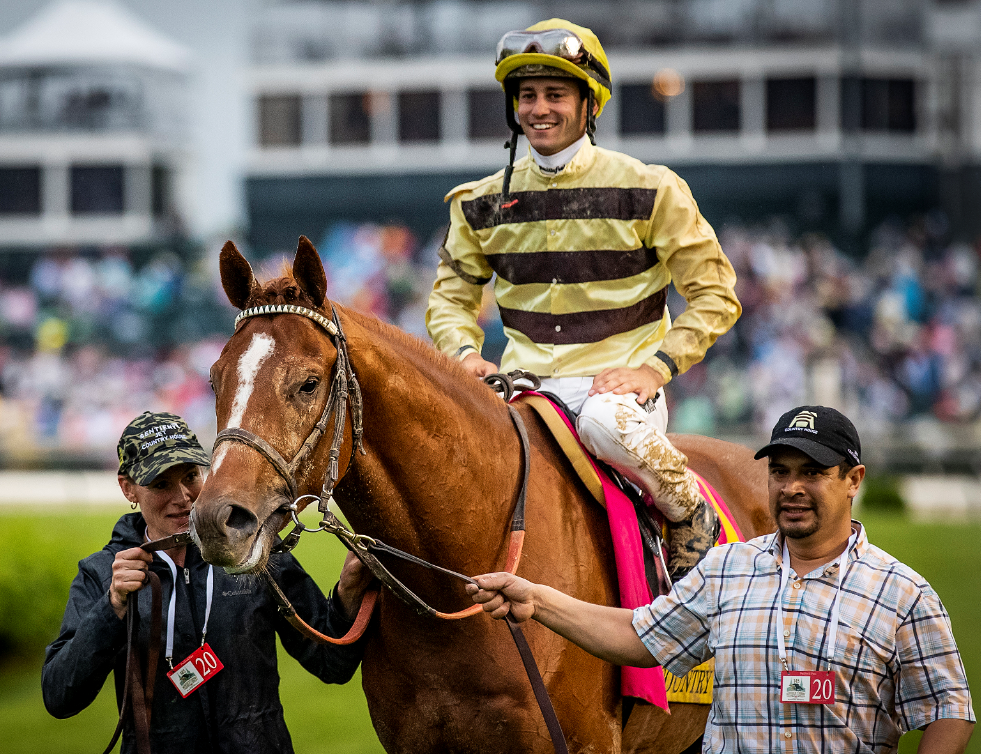 More than two hours after the 2019 Kentucky Derby, where the stewards demoted Maximum Security for interference and effected the largest single shift of money in American racing history – racing fans, media and even the previously uninterested public sought some clarity on the decision that was made.

Remarkably, no explanation was extended by the stewards to NBC’s national audience during the most watched American horse race of the year, of every year.

Through track announcer Travis Stone, it was originally announced to the on-track and simulcast audience that Flavien Prat, jockey of Country House, objected against Luis Saez, aboard Maximum Security. Through countless replays, on-track and on NBC, the world waited. Curiously, there had been no general stewards’ inquiry.

After 22 minutes Maximum Security was demoted, off the board entirely, though his exact placement was not announced. Later videos released by Churchill Downs made it clear there was confusion even in the explanation of the demotion to Stone.

In a crowded media room behind the Churchill grandstand, the stewards appeared and read a brief statement, having previously noted that there would be no questions.

“The riders of the 18 (Long Range Toddy) and 20 (Country House) horses in the Kentucky Derby lodged objections against the 7 (Maximum Security) horse, the winner, due to interference turning for home, leaving the 1/4 pole.

We had a lengthy review of the race. We interviewed affected riders. We determined that the 7 horse drifted out and impacted the progress of Number 1 (War of Will), in turn, interfering with the 18 and 21 (Bodexpress). Those horses were all affected, we thought, by the interference.

Therefore, we unanimously determined to disqualify Number 7 and place him behind the 18, the 18 being the lowest‑placed horse that he bothered, which is our typical procedure.”

Daily Racing Form national correspondent Jay Privman, who was tasked with writing that publication’s Derby recap story, summarized the event on Twitter the next day.

“So, to review, stewards did not post the inquiry sign themselves; if 2 riders don’t claim, nothing happens. Then they took no questions about decision, only made statement. For the biggest race in the country.”

It was not a good look.

“We come to learn, two hours later when the stewards made their statement, that [Long Range Toddy’s jockey] Jon Court had lodged a claim of foul, and I don’t think anyone else knew this had happened,” Privman recently told the Thoroughbred Idea Foundation. “It was a pretty egregious oversight regarding how the process should work.”

“There was an announcement right before the stewards came to make their statement that they would not take questions. Well, that was not well-received by anybody. When they did come to the room and did refuse, that resulted in even more consternation and several people getting really aggressively angry over that tact.”

It does not have to be this way.

“There seems to be a disconnect, or lack of awareness, by stewards regarding their responsibility to explain what they did in a high-profile situation, let alone a day-to-day, run-of-the-mill, race one inquiry,” Privman notes.

“Hopefully this will result in better communication, including the stewards actually being the ones to explain themselves as opposed to relaying an explanation to the announcer who then has to inform the public as to what was said. If a hockey or football referee can be mic’d, and it is part of their job duty to explain the penalty in a game, there is no reason why one of the three stewards can’t come into the booth, explain straight from their mouth what was done. It should be an essential part of their duties.”

Across the world, stewards routinely explain their decisions in writing and supplement those with additional media interactions. This most basic function of the stewards in jurisdictions outside North America was explained in great detail in our August 2019 white paper, “Seeking Transparency.”

With the first anniversary of the confusing day, with its less-than-transparent decision-making process, upon us, we wanted to offer a re-creation of what a full stewards’ report from the 2019 Kentucky Derby may have looked like. Reports such as these, with regional differences in style and delivery, are produced for nearly every race in Australia, Great Britain, Hong Kong, Ireland, Malaysia, New Zealand, Singapore, South Africa, United Arab Emirates and Zimbabwe – just to name a few. Our linked white paper offers a number of examples in its appendices.

The Thoroughbred Idea Foundation consulted several chief stewards from overseas jurisdictions to offer input on the report below.

Given the frenetic nature of the Kentucky Derby, the only American flat race with 20 runners permitted, and combined with the attention and overall public investment in the race, there is more printed in this report than a “normal” race. A proper stewards' communication plan would also include media availability. We wanted to offer a full picture of the stewards’ report for your consideration of what is possible given the inspiration provided by the daily actions of stewards’ panels around the globe.

TAX, from gate two, broke outward while GREY MAGICIAN, from gate four, broke inward, forcing BY MY STANDARDS to take up soon after the start.

TACITUS checked and lost ground after being pressured from his outside by PLUS QUE PARFAIT. TACITUS commenced to race rank after this incident, with a high head carriage, and as he was unsettled and shifting out, led CODE OF HONOR to shift outward as well, leading that horse to brush with COUNTRY HOUSE through the end of the first furlong.

WAR OF WILL over-raced through much of the early portions of the race, particularly getting his head up when racing awkwardly behind MAXIMUM SECURITY leaving the first turn and through the five-furlong pole.

SPINOFF raced wide and without cover down the backstretch.

Leaving the half-mile pole, COUNTRY HOUSE began to gain on BODEXPRESS and was guided to his outside, bumping with VEKOMA who began to come under a ride, who brushed with SPINOFF, who bumped CUTTING HUMOR.

Leaving the backstretch, IMPROBABLE and SPINOFF were both checked as a result of TACITUS initially being taken out by PLUS QUE PARFAIT before being straightened by its rider. At the same time, CUTTING HUMOR, which was racing to the outside, shifted in.

Shortly after the finish, Jockeys J Court (LONG RANGE TODDY) and F Prat (COUNTRY HOUSE) each notified officials that they were lodging objections against jockey L Saez (MAXIMUM SECURITY) due to incidents around the far turn.

In considering this matter, the Stewards took evidence by phone from the following riders: L Saez, F Prat, J Court.

After taking evidence from all parties concerned and after a prolonged viewing of the many replay angles available to them, the Stewards found two separate incidents that warranted consideration.

First, they found that approaching the three-eighths, WAR OF WILL was shifted out in search of clear running from behind the heels of MAXIMUM SECURITY, making contact with LONG RANGE TODDY, who had come under pressure shortly before this point and became unbalanced. MAXIMUM SECURITY, who was also coming under a ride, drifted away from the rail ahead of WAR OF WILL, as that rival made contact with LONG RANGE TODDY, who shifted out in response to that and made contact with BODEXPRESS, who was commencing to give ground, and slightly bumped with COUNTRY HOUSE to his outside.

After passing the five-sixteenths pole, the Stewards found the horses then raced without incident for a few more strides until MAXIMUM SECURITY shifted ground and commenced a chain reaction, impeding WAR OF WILL, who in-turn impeded LONG RANGE TODDY, which caused BODEXPRESS to be severely checked. TACITUS, who was racing behind BODEXPRESS at this point, was steadied to avoid the heels of that horse and shifted inwards to obtain clear running. As LONG RANGE TODDY was giving ground, he further caused CUTTING HUMOR to shift outward.

Approaching the quarter pole, the stewards found Jockey L Saez shifted MAXIMUM SECURITY back to the inside in response to the previous incident, which caused him to contact CODE OF HONOR, who was well-established racing along the inside rail, and became badly unbalanced as he was vying for the lead.

The Stewards were of the opinion that the interference suffered to COUNTRY HOUSE was inconsequential in respect of the placings of the race and dismissed the objection lodged by Jockey F Prat.

The Stewards were comfortably satisfied that the swerving of MAXIMUM SECURITY, which caused interference to a number of horses, including LONG RANGE TODDY, was a foul that altered the finish of the race.

The Stewards believed that had the interference suffered to LONG RANGE TODDY, among other affected rivals, not occurred, LONG RANGE TODDY would have secured a better finishing position. (810 KAR 4:040 Sec 12 Ln 4). As a result, the stewards upheld the objection lodged by Jockey J Court and demoted MAXIMUM SECURITY from first to 17th place, behind LONG RANGE TODDY.

At a subsequent inquiry, Jockey L Saez (MAXIMUM SECURITY) was found guilty of a charge of careless riding (810 KAR 4:040 Sec 13 Ln 3) in that he failed to take sufficient measures to prevent MAXIMUM SECURITY from shifting out which resulted in significant interference suffered by WAR OF WILL, LONG RANGE TODDY and BODEXPRESS, and in a secondary incident, CODE OF HONOR, with less significant interference suffered by COUNTRY HOUSE, TACITUS and CUTTING HUMOR. L Saez was suspended for a period of 15 race days given the severe nature of his carelessness and the nature of the race. He was advised of his right to appeal.

All jockeys in the above-mentioned incidents will be required to review race footage with the Stewards, either in person or via videoconference, in the coming days.