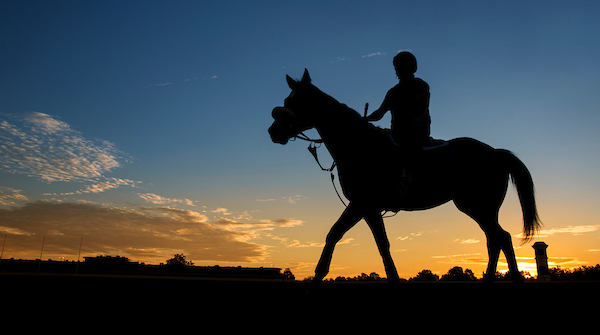 The Thoroughbred Idea Foundation solicited readers to submit their own ideas, and will continue to do so, in the hopes of spurring positive thoughts, change and innovation within racing.

Robert Hickey and Samantha Bussanich each contributed an idea which earned a tie in the number of votes assigned by the voters, comprised of the TIF’s Board of Directors and Executive Director. As a result, Hickey and Bussanich will each direct $1,750 to the racing-related, 501(c) (3) charities of their choice (without a tie, first place received $2,000 to direct and second place $1,500). Third-place went to an idea submitted by Alex Schettine.

Let’s delve into the winning ideas.

Idea Submitted by: Robert Hickey - $1,750 will be donated in Robert’s name to ReRun.

We need some type of cover at major racetracks to keep turf courses firm. I am a small owner and I have lost countless opportunities in New York to run my horses. Why should stakes races, or even Breeders’ Cups, be threatened by rain?

TIF’s Take: Robert’s idea, simple in its delivery, really got us thinking – why can’t this happen? And more so, how much money might really be lost year after year from races taken off the turf due to excessive natural watering?

We enlisted the help of Chris Rossi to research some of the actual figures around races moved off the turf and approximating the impact to handle.

The actual total handle derived from those 193 races was $154.6 million. But how much did they lose by moving those races to the dirt, yielding smaller fields? An exact number is nearly impossible to derive, and approximations are going to be just that. But for the sake of the argument, it’s worth a shot at just projecting the potential impact.

Using a metric derived from each of the three NYRA tracks – handle per betting interest in turf races – we can at least get some idea. In 2018 alone, the estimated handle loss due to the smaller fields in off-the-turf races is approximately $152 million, roughly the same size of the actual handle.

Again, we can’t stress enough that this is a very rough estimate.

Now, over the last five full calendar years, NYRA has seen 641 races taken off the turf across its three tracks. Those races actually handled $509 million, but using the same rough metric to estimate handle per interest in turf races, could have been $949 million. The approximate handle lost over five years of races being shifted from turf to dirt is an astounding $440 million.

Surely some of that money found its way back into racing, to other tracks or saved for other days. But there is an impact, and this quantification, approximate though it may be, could make it worthwhile to pursue Robert’s idea. If the actual figure was even half that amount, wouldn’t tracks be incentivized to find a way to keep more races on the grass?

Idea Submitted by: Samantha Bussanich - $1,750 will be donated in Samantha’s name to the Belmont Child Care Association.

The major American racing events should consider offering student tickets and discounts as a way of attracting younger race-goers to premier events.

I have attended basically every major racing event in the United States (Triple Crown races, six Breeders' Cups, every graded stakes day at Saratoga & Keeneland, etc) as both a fan and a horsewoman. Most general admission tickets for the biggest events cost over US$60, and if you wanted a seat, plenty more than that.

Recently, I attended British Champions day at Ascot with a student ticket that cost 10 pounds (about US$13). As an aside, the organizers gave away 2,000 free tickets on a ‘first come first served basis,’ but I was not a part of that 2,000.

It was the greatest race day of my life.

-    Our own private entrance. We checked in with our ticket and student ID and received a lanyard with different pieces of information hanging off of it. One had the times of all events including race days and student specific events, a "don't miss" information section that told you information about certain drinks, fan zones, games, merchandise, an entry to a car raffle and an entry to a raffle for a year of free rent. All of this was just on the lanyard!

-    We finally walked into the venue and the students had their own private inside enclosure with couches, tables and a bar. We were greeted by staff that handed us a free scarf that every student received and a lapel pin. I didn't even see the race track or a horse yet and I was already blown away. Students were also given a free alcoholic drink voucher to use.

-    The students were allowed to go into the Queen Anne Enclosure where the rest of the general public was, but down the track they also had their own “students’ only” area where there was food stands and drinks were just for students.

-    If you weren't into racing as much there was a general area on the opposite side of the track with a lovely live band and MANY food options. Long lines were never an issue given the number of options. You could dance, sit and eat, or socialize. It was wonderful.
I felt like I was being treated like a queen, and only for 10 pounds.

In America, we do not have ANYTHING like this on big race days. How are we supposed to attract young fans to our big events and showcase the amazing animals we have to offer when it is so incredibly expensive to go?

In order to get fans into the game we have to show them what our big days are like. Everyone wants to go to the Super Bowl, World Series, or Stanley Cup more than a normal game. Horse racing is lucky in that it often has the space necessary to create different sections of the track and add more seating whether it is in the infield or, for example, the far turn at Keeneland where they hoisted large temporary chalets for the Breeders’ Cup.

Even the Kentucky Derby infield tickets are more expensive than British Champions Day and you get absolutely nothing out of that ticket other than covering your entrance fee. We have to find a way to give students a unique and more affordable option to attend big race days.

Below are the websites dedicated to students. The Facebook page is very user friendly and had small giveaways and such leading up to the event. They continue to post events, photos of racehorses on the page to engage interest during the off season.

TIF’s Take: Samantha’s idea, shared with the detail of her personal experience, is as brilliant as it is obvious. Engaging younger customers with tailored experiences around the sport’s biggest events is a cost outlay in the short-term with hopes that the pointed attention yields more long-term benefits in coming years. It would be great to see the Triple Crown events, Breeders’ Cup, Queen’s Plate and other major race days provide these bespoke experiences for students.

Idea Submitted by: Alex Schettine - $250 will be donated in Alex’s name to both the Permanently Disabled Jockeys’ Fund and the Belmont Child Care Association.

If tracks made racing past performances that were formatted in a way that casual fans could access for free, but also made that data accessible via an API (application program interface) or in some machine readable format, then I believe it is highly probable the handle would dramatically increase.

It would be very probable that funds with algorithms and or AI/Machine Learning will start feeding that data into programs that will generate large scale betting that is all automated. It is very similar to when the NYSE, CME Group, ICE exchanges made stock and commodities trading electronic – as opposed to open outcry trading, and the data was opened to be analyzed in bulk.

When *both* of those elements existed, the volumes on the exchanges went up drastically (and they made more money - as more volume equals more money to an exchange).

Currently with the ADW platforms, we have easy electronic ways to make bets - but as I understand it, open data for 'funds' to start leveraging that technology to make wagers on a scale that has yet to be seen.

It would benefit the tracks’ bottom line immediately and ultimately make the entire industry much stronger - with the rising tide of dramatically increased handle floating all boats.

TIF Take: So much more can be done with racing’s data than the status quo. There should assuredly be some costs associated with that, but the proper pricing to entice potential investors to tackle racing’s data does not seem to exist. Racing should be encouraging outside entities to participate in the sport. A massive barrier to entry – access to affordable data – keeps many from doing so.

Please continue to submit your ideas for consideration in future TIF Idea Blasts. You can do so by clicking this link.