While this weekly feature has routinely covered issues related to data horseplayers consume or are offered at outrageous price points, the economist inside of this horseplayer, horse owner and breeder is left to ponder how the greater racing industry has collectively ignored years of troubling trends in the data the industry reports itself.

After a modest uptick in annual wagering on Thoroughbred races from 2014 to 2018, betting fell by 2% in 2019. The “surge” in handle over those five years was mostly an illusion anyway: after accounting for inflation, handle increased by only 0.67%.

However, this five-year stretch was a respite from the hemorrhaging that had occurred since 2002, resulting in an inflation-adjusted decline of 48% by 2019. One would expect such a decline would have a crippling effect on the sport. To this point, it hasn’t, but there are huge warning signs to suggest trouble ahead.

Traditionally, racing’s piece of handle has driven purses. States gave racetracks legal monopolies on gambling and split takeout with them. Horse racing thrived both as a gambling pursuit and a popular spectator sport. The rise of casinos, lotteries, slots rooms, bingo parlors and the like, eliminated racing’s gambling monopoly and yet if one were to look at racing today, they’d see very little evidence that the sport has adjusted. Only keno and the lottery are worse bets than racing.

The greater competition over the last decade has resulted in industry retrenchment through higher host fees (what racetracks charge for the distribution of their signals) and source market fees (applied to those who bet online at the behest of the state’s racetracks, horsemen and breeders). Horsemen have often complained about the greed of ADWs and the need for high takeout, host fees, source market fees, etc. to pay for purses, but in reality, purses in most states have less and less to do with handle.

State governments, who in the past taxed the only gambling game in town, are now subsidizing it with money derived from other forms of gambling, a two-decade long trend that has become a systemic issue for the business. The peak of this subsidization was 2019, a landmark year for purses, which reached a record 10.6% of handle. 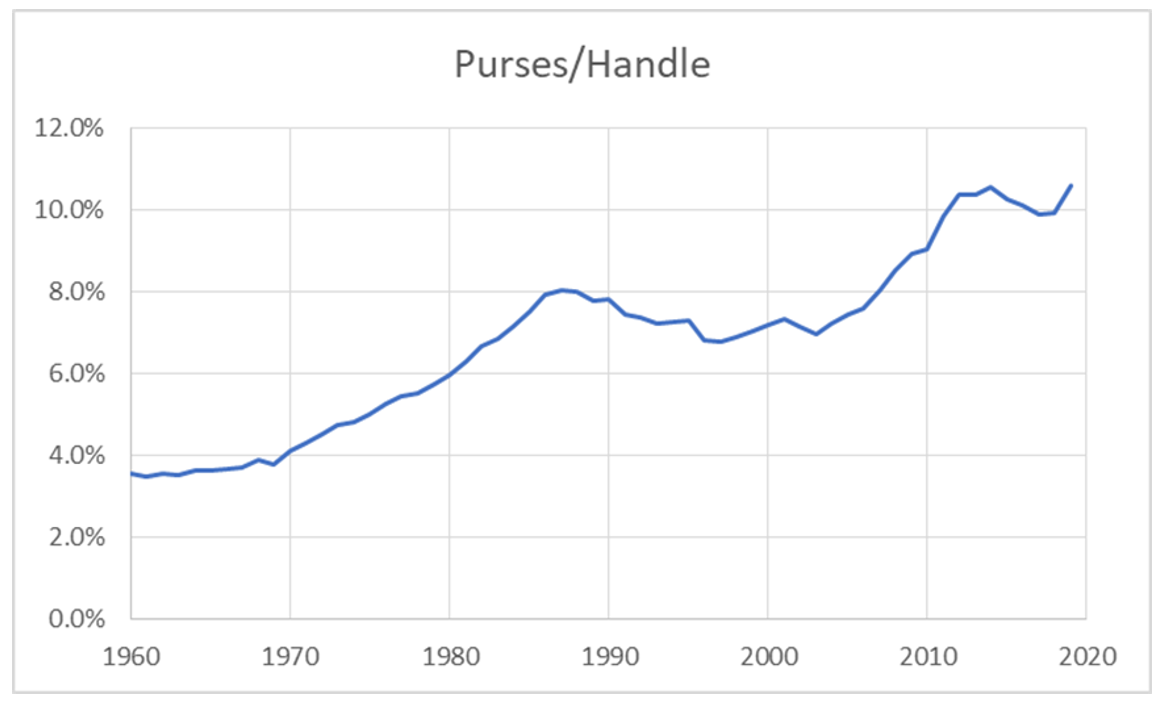 In horse racing’s heyday, let’s call that the pre-expanded gaming or wagering decades, at least through the 1960s, the ratio of purses to handle hovered between 3-5%. In the late 1980s it reached 8%, a height not to be reached again until 2007 as presumably racing was finding its way in the simulcasting era. Now, comfortably subsidized, the industry is becoming further detached from the horseplayer. But what governments can give, governments can take away when other fiscal pressures arise, and it’s happening.

West Virginia horsemen experienced dramatic growth in purses in the 2000’s with gross purses reaching a peak of $89 million and $19,326 per race, up from $34 million and $8,408 per race only five years earlier. However, as a result of declining casino business and a larger state carve-out, gross purses fell back to $34 million by 2018, or an inflation adjusted 71% below the 2004 peak. Worse still, there are talks of decoupling the state’s racetracks from their casinos, and a bill was recently introduced to start that process at the state’s greyhound tracks. Expect a fight, but the nationwide track record of such battles has been a losing one. 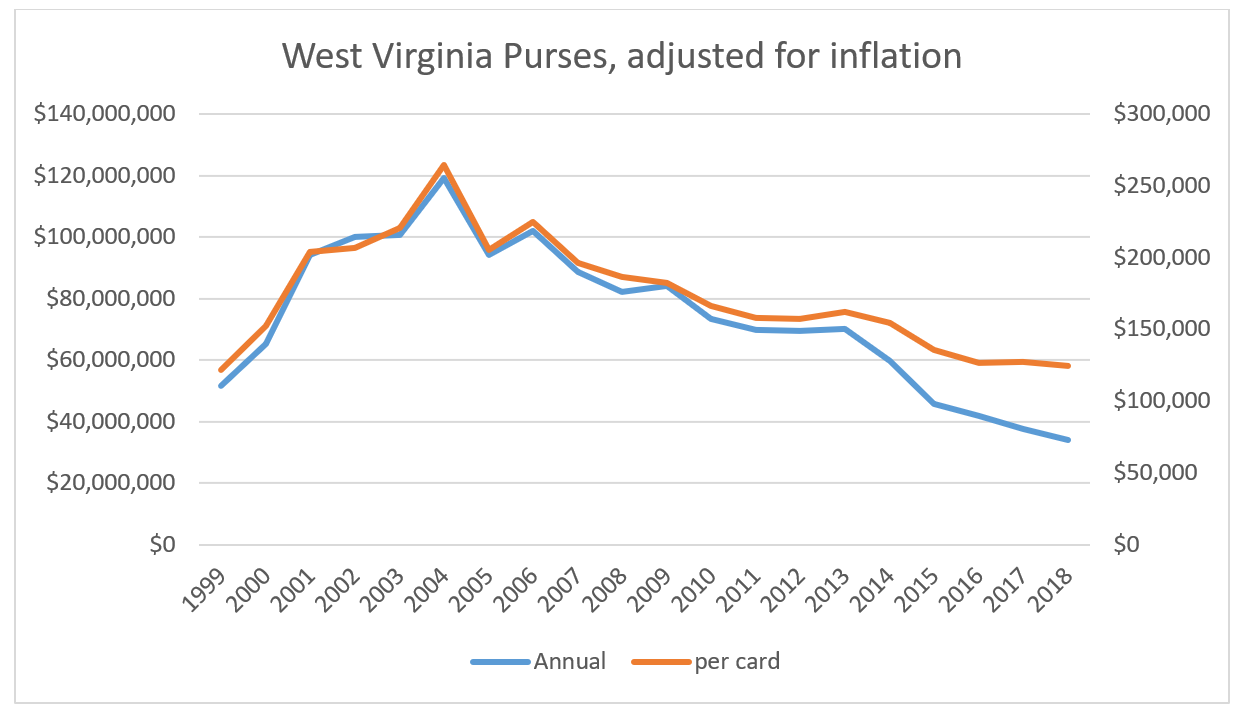 The only way to ensure the long-term survival of horse racing is to grow handle. The obvious starting point is competitive pricing.

In 1970, takeout in New York was 17% of handle but 10% of handle went to the state in taxes. The tracks operated on 7% of handle. Today, states take a negligible amount from handle AND purses are subsidized by gaming.

This is perfectly rational behavior if your sole goal was present day enrichment at the expense of any sustainable future. I love racing, I love the challenge of betting on races and I love the experiences and success I’ve had with my friends and partners owning and breeding. It is undeniable that suboptimal policies have ruled racing for the last decades, unchecked by the industry’s leaders. The data are there.

There are many steps needed to begin the process to save it. Let’s start by drastically reducing takeout.

Dr. Marshall Gramm is Professor and Chair of the Department of Economics at Rhodes College. He is the co-founder (with partner Clay Sanders) of Ten Strike Racing, a racing syndicate responsible for more than 1,000 starts with over 250 wins and earnings in excess of $7.8 million. An avid horseplayer, Gramm has enjoyed success in some of the leading handicapping tournaments in America, finishing fifth at the 2018 Breeders’ Cup Betting Challenge and ninth at the 2019 National Horseplayers’ Championship. 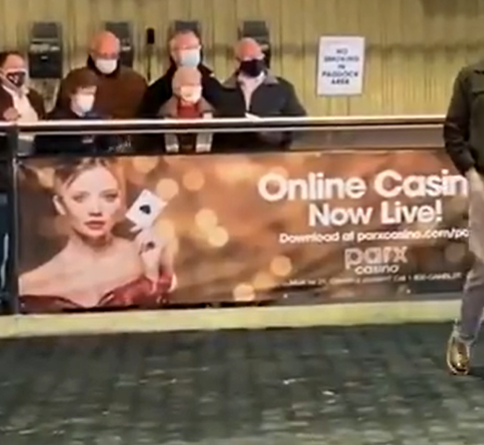