Glen Hill Farm CEO Craig Bernick, also the Thoroughbred Idea Foundation founder and board chairman, offered his thoughts on the state of data in North American racing in an op-ed this week.

Bernick wrote: “Consider the environment in today’s sports world. From ‘moneyball’ to fantasy leagues, from sports reporters to internet chat rooms, from the executive to the casual fan, every participant feels a measure of expertise because of the ready availability of data. If racing is to generate new enthusiasm, if it is to increase its fan base, if it is to capture its share of the action as sports betting continues to spread, it must be part of these conversations.

"This isn’t pleading for a handout. It’s pleading for a commonsense rehabilitation of racing’s information business in North America. Premium, value-added products still have a place in the market. This isn’t about asking for Beyer figures, Ragozins, Stats Race Lens, Thoro-graph, or Timeform. Customers should still, rightly, pay for premium information.

"We need medication reform, rules uniformity, better pricing, much greater transparency and many other improvements to our sport.

"One entity can fix one problem that impacts so many of us and could have an immediate impact. Help us out, Equibase, and then we’ll move forward together to work on the other issues."

Many of Korea’s best horses trace their roots to American bloodlines – the top five stallions by earnings last year were former American runners Ecton Park, Menifee, Officer, Peace Rules and Sharp Humor. For now, all of the jurisdiction’s racing occurs on deep, sandy tracks, and Korea continues to invest significantly in American bloodstock.

As outlined in this feature, the KRA Stud Farm is “part of a long-term plan by the Korea Racing Authority to improve their racing and breeding stock and to make Korean-bred Thoroughbreds more internationally prominent,” and owns Knicks Go, winner of the 2018 Claiborne Breeders’ Futurity and second in the Breeders’ Cup Juvenile (and running today at Keeneland).

In 2018, Korea raced thoroughbreds at two tracks across 192 race days, with 1,906 races and just more than 20,000 starters for a robust field size of 10.5 horses per race. The total wagered was roughly US$7 billion, and all of it coming on-track, or via off-track wagering centers. Online wagering is still not permitted by law.

Sky Racing World distributes the Korean races to ADW outlets in North America and offers a host of free information (more on that next week).

One major element of differentiation between Korean racing and North American racing is the availability of even basic data for user download. Via their website, the Korea Racing Authority enables users to download spreadsheets (see image below) containing basic racing information. Free access to race replays allows customers the opportunity to add context to the data, which is bolstered by separately available in-running positions and sectional times which can be easily copied and pasted to the race data, though not directly in the downloaded files. 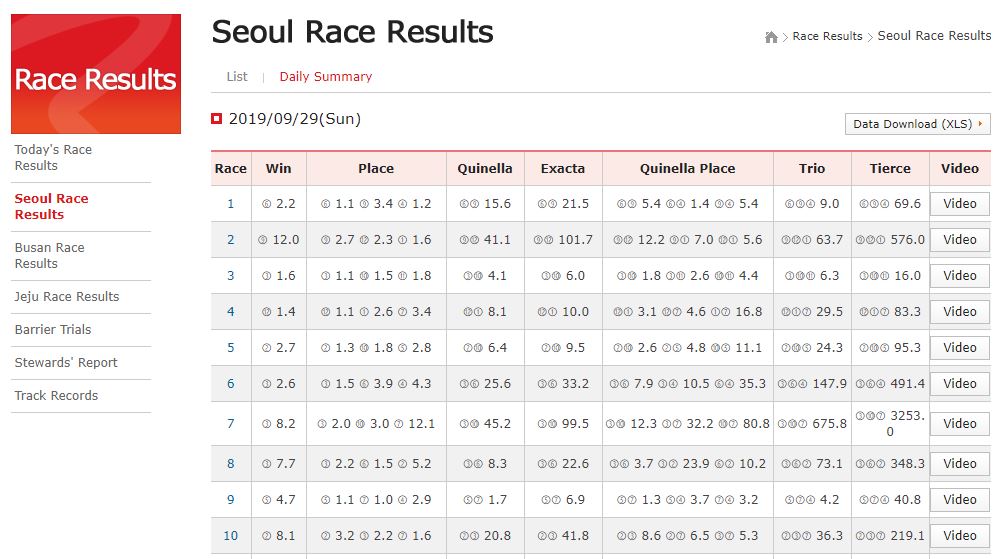 Is it perfect? No.

Is it far, far better than anything available on the North American market? Yes.

Equibase does not need to reinvent the wheel, but it is desperately in need of some grease to get North American racing moving in a better direction.

#FreeDataFriday - Volume 41 - Golf Betting, Powered by Data, Due to Soar

#FreeDataFriday - Volume 40 - Competition Good For All