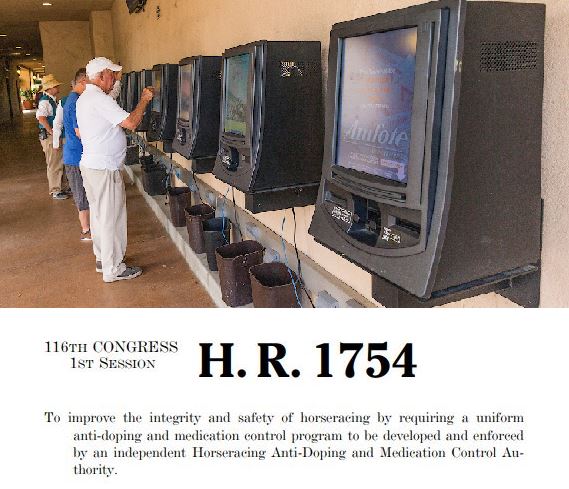 The Horseracing Integrity Act of 2019 (H.R. 1754) was introduced by Representatives Paul Tonko (D-NY) and Andy Barr (R-KY) on March 14. The measure is supported extensively by The Jockey Club, which cited the legislation's passage as a "meaningful start" in its recent white paper: "Vision 2025: To Prosper, Horseracing Needs Meaningful Reform."

A Bloodhorse story noted “H.R. 1754 is nearly identical to the Horseracing Integrity Act of 2017 (H.R. 2651) – also introduced by Reps. Barr and Tonko – which garnered the bipartisan support of more than 130 representatives last Congress.”

Analyzing the language in both H.R. 1754 and the original H.R. 2651 reveals this assertion from Bloodhorse to be true. The text across the 43 pages of both the original and current legislation is practically unchanged – except for one key area related to funding.

“PROHIBITION ON INCREASED TAKEOUT. – No State racing commission may increase the takeout of any racetrack to collect fees to fund the Authority.”

The 2019 version does not include such a clause, and is the only meaningful amendment to the original 2017 version.

Technically, if H.R. 1754 became law, state commissions could raise takeout to pay for their state’s contribution to the establishment of an independent Horseracing Anti-Doping and Medication Control Authority.

A provision was added to H.R. 1754 that did not appear in the 2017 version, called a “Sense of Congress.” The exact language follows:

“It is the sense of Congress that funding mechanisms imposed by State racing commissions should apportion the funding burden fairly among all impacted segments of the horseracing industry and may include check-off programs.”

According to the Congressional Research Service, “‘[s]ense of’ proposals have no force in law,” but rather represent an opinion built into the legislation and are not an enforceable requirement. In other words, states would not be bound by the opinion within the legislation that the funding burden be shared equally.

Unfortunately, and much more potentially detrimental to horseplayers, there would be nothing to stop a state from hiking the cost of wagering to pay for participation in the Horseracing Integrity Act, if enacted.

The Thoroughbred Idea Foundation supports meaningful reform for the racing industry, its board a cross-section of owners, breeders and horseplayers. We are concerned the language change in the legislation represents a slippery slope that could easily see the cost of reform pushed onto the backs of horseplayers - the very same group whose participation in racing has declined 47%, adjusted for inflation, in just the last 15 years.