Debate will likely ensue over the coming weeks and months as the budget goes through committee hearings, and horsemen will surely have a loud voice in the proceedings. A major question around this money grab will revolve around the state’s ability to repurpose the money given it resides in trust, a move which passed in 2017 and was designed to keep the money, intended to go to the industry, in that spot.

It’s certainly worth the fight.

The state’s racing industry claimed a direct economic impact of more than $721 million in 2018.

How this would all be done is uncertain at this point, but let’s consider the worst-case scenario.

Handle on Pennsylvania racing has declined substantially since slot machines came to the state. Relative to the amount of handle which funds purses, that portion is down nearly 70% adjusted for inflation. 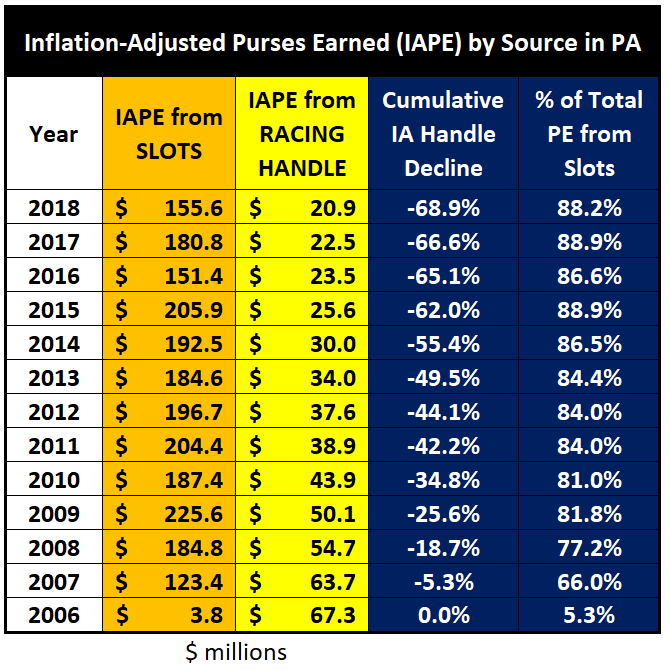 The total amount of purses earned from handle in all Pennsylvania races (Thoroughbred and Standardbred) in 2018 was $20.9 million from a combined 908 race days. In the crudest form of math, a simple average suggests that would be enough to account for just $21,000 PER DAY compared to the current figure of nearly $200,000 per day.

The reality is undoubtedly different considering many other factors, but in this most dire scenario, major contraction would be needed to continue operating racing in the state. According to figures reported by The Jockey Club, Pennsylvania hosted roughly 9% of all American Thoroughbred races in 2018.

ONTARIO – FIRST IN, FIRST OUT

The Ontario provincial government enabled revenue from slot machines at racetracks to flow to purses in its 1996 budget. 16 years later, a new government cut off racing from receiving revenue from racetrack casinos as part of a deal to trim outstanding deficits. Temporary subsidies were provided for several years while a longer-term solution was negotiated.

Dave Briggs authored a sobering six-part series for Thoroughbred Racing Commentary in 2014 which outlined the Ontario situation. Briggs offered a warning to those who have enjoyed slots-fueled purses:

“The government is fond of laying the blame on an industry that relied too heavily on slot revenue and did little to attract racing customers…People in the horse racing industry need constant reminders that slot money is not their entitlement, won’t last forever, and has to be reinvested in the industry to make every effort to create racing customers, improve the game, and attract more people to bet on horses or buy them.”

In 2018, Ontario Racing landed a deal which would provide tens of millions in annual subsidies from the provincial government to the industry over the next 19 years, the majority of it going to prize money. The deal, however, does significantly curtail over time – with C$91 million going to purses in the first four years and just C$40 million in each of the next 15 years of the deal.

A recent audit by Ontario’s Ministry of Finance was even critical of this path. “The latest funding agreement does not encourage the industry to become self-sustaining.”

Mindful of the need to make its ecosystem more sustainable, Woodbine is taking control of its own future, launching a property development plan that will transform its massive site and its overall approach to racing.

“The leadership team at Woodbine Entertainment has long envisioned pursuing the responsible redevelopment of its underutilized lands in line with its corporate values as community stewards; leveraging its real estate assets to expand its business, diversify its visitor base and revenue streams, continue to deliver an unparalleled horseracing experience to the world, and ensure the long-term sustainability of the horseracing industry in Ontario...

“Woodbine will continue to be the ultimate destination for horse racing and gaming, while integrating new expanded entertainment and cultural offerings, food and dining, hotel, shopping, employment, post-secondary education, recreation, health, wellness, and urban residential living. It will be an exhilarating place to live, work, and play all within a walkable community framework – a true next-generation neighbourhood.”

Woodbine, in concert with its regulator, the Alcohol and Gaming Commission of Ontario (AGCO) was engaged in a two-month experiment on crop-use, the most dramatic urging rule adopted in North American Thoroughbred racing to date.

Suggesting that horseplayers did not abandon Woodbine during this experiment, per-race year-over-year handle increased during the experiment. Woodbine debuted a second turf course in 2019 with the continent’s most modern drainage system and Chief Executive Officer Jim Lawson is an outspoken advocate for adopting the Category 1 interference philosophy championed by the Thoroughbred Idea Foundation. The track is at the forefront of continental industry development and clearly not leery of trying new things.

Lawson noted in a January 2019 interview with the Paulick Report that a changing industry will mean some are obviously left unsatisfied, a natural by-product, but necessary to keep racing as strong as possible.

“So when the pie is somewhat finite, which it is, and it may be shrinking, I don't think you do keep everyone happy. It may be very idealistic on my part, but people just have to take off their own hat and look at what's best for the industry, to try and sustain the strongest industry that we can.

“It's not ideal, but there are going to have to be some choices made. Not everyone around that Ontario Racing constituency is going to be happy with what may be some inevitable choices on how best to keep this industry going.  By its very nature, there are different interests.”

Not all of the Woodbine decisions will be perfect, but some bold actions to plot a more sustainable future are underway, and potentially with more to come.

Our recent white paper, “American Racing’s Sustainable Future,” outlined the systemic threats facing the greater sport, topics which go far beyond divisive topics such as “the federal bill.” These are fundamental, and often long-ignored business concerns relative to the continued operation of racing.

“Two decades of subsidies have enabled two decades of ignorance. We need to make our wagering offerings as competitive as possible, and that include a sport that adopts far greater transparency out of respect for all its participants,” said Patrick Cummings, the Thoroughbred Idea Foundation’s Executive Director.

“The path to a better future is going to require significant and challenging reform. While the Pennsylvania situation is one of the most dire, and there is still a long way to go before any realization of this latest attempt to eliminate thousands of jobs and hundreds of millions in economic impact for what is undoubtedly a meaningful cause, horsemen must take a firm grip of the future and demand their customers are presented with a much more competitive product.” 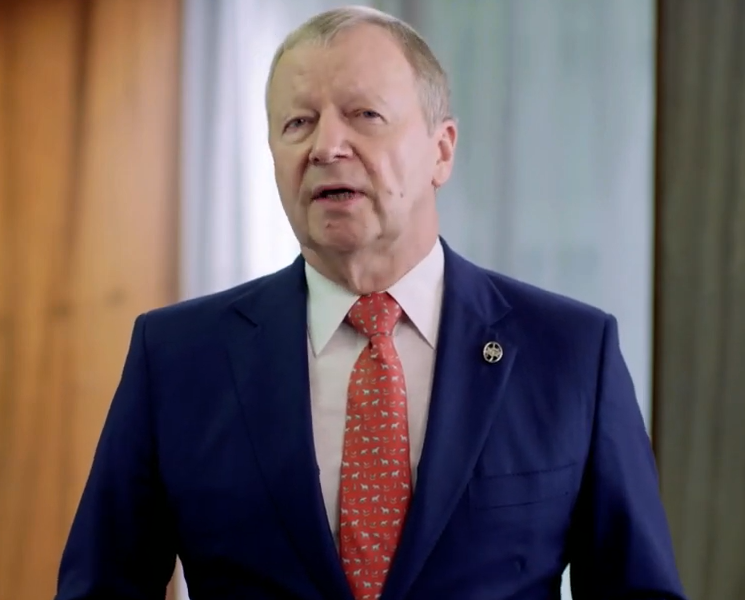